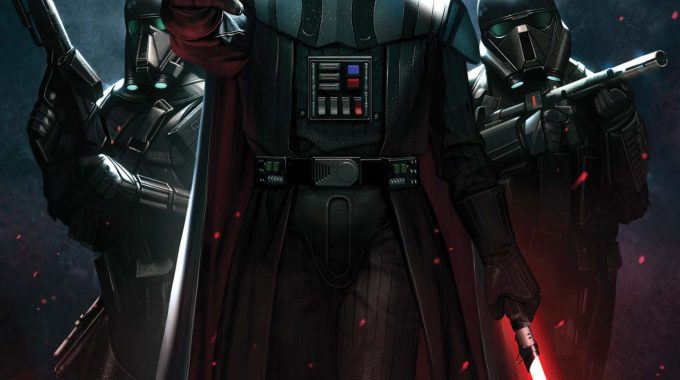 Since Star Wars is back with a new volume, it only makes sense that big bad Darth Vader should get a new volume as well. The third volume in the Dark Lord of the Sith’s untold comic book story fills in the time between A New Hope and Empire Strikes Back, and finds Vader attempting to discover how Luke Skywalker’s existence could have been hidden from him. After some truly stunning runs from creative teams Keiron Gillen and Salvador Larocca and Charles Soule and Giuseppe Camuncoli, there’s a high bar for any new series bearing the name Darth Vader. Luckily for us, new writer Greg Pak and artist Raffaele Lenco deliver a truly great opening issue that adds new layers to not only the original trilogy, but the Prequels as well.

Reeling from the events of the Empire Strikes Back, Darth Vader #1 finds the Dark Lord of the Sith uncovering the mystery of who hid the existence of his son from him, and how they pulled it off. More so than ever before, Darth Vader is on the warpath, and that brings him back to Tatooine, where he uncovers the Lars homestead, and must deal with a group of mercenaries looking to take down the Dark Lord of the Sith. But it’s when he returns to Coruscant that Vader uncovers a truly shocking revelation that will test his allegiance to the Empire and Palpatine.

Simply put, Greg Pak knocks this out of the park. Continuing the grand tradition of previous Marvel Star Wars series, Pak embraces all aspects of the franchise up to the point of the story he’s telling, and uses them to grand effect. Pak’s use of scenes from the Prequel Trilogy are fantastic, and cast a brand new light on even the most cringe-inducing scenes from Attack of the Clones and Revenge of the Sith. Even more impressive is the fact that Pak’s script has no real inner monologue for Vader. Instead he uses the Sith Lord’s memories to paint a brutal and tragic backstory for one of cinema’s greatest villains.

Adding to Pak’s script is Raffaele Lenco’s artwork, which amazingly does a lot of heavy lifting with Vader, despite the fact that his face never changes due to his helmet. Through use of light and shading, Vader’s helmet seems to have its own style and sense of expression, despite never moving. It’s a true testament to Lenco’s art, and I will be very surprised if his work here doesn’t elevate him to even more high-profile projects with Marvel.

The Star Wars franchise may be on a little bit of shaky ground when it comes to the movies, but on the comic stands it hasn’t been this strong since Marvel first launched their comics. By tapping into another relatively untold section of the Star Wars canon, Greg Pak and Raffaele Lenco deliver a truly fantastic and engaging series that will thrill fans of the franchise, and stands as a must-read for all Star Wars fans.