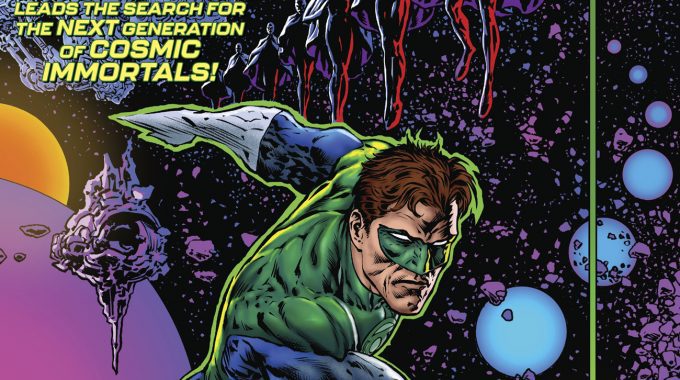 Grant Morrison’s run on Green Lantern hasn’t been the mega hit that his work is used to, and I’m not entirely sure why. It’s not like it’s any weirder than his run on Batman or Transmetropolitan, and it features stellar artwork from Liam Sharp. But for some reason, it’s not the surefire hit that DC was expecting. Despite that, the publisher is giving Green Lantern and Grant Morrison a shiny new #1 with Green Lantern Season Two, which hits the right balance between weird and accessible Grant Morrison.

Picking after the events of the Blackstars miniseries, Season Two finds Hal Jordan back with the Lantern Corps after defeating the Blackstars from within. Eager to get back into the field, Hal is teamed up with a new alien that may or may not be set up to become a new recruit. As the two deduce the mastermind behind an attack of alien cyborg apes against a planet, Hal learns the new upgrades his reissued Lantern has, as well the fact that he needs to return to Earth to help prevent a new threat that has arrived there.

It’s well known that Grant Morrison is a “out there idea” kind of guy, and that’s no different with Green Lantern. But for as insane and crazy as this script is, it’s also fairly accessible. While Morrison’s Hal Jordan is a little too stiff in his characterization, the real strength here is that you can read this issue and easily pick up the threads of the previous works Morrison has written in this run. That’s a pretty impressive thing, considering the subtitle Season Two on the cover of the book.

Liam Sharp is probably one of the most underrated artists that DC has, and it’s truly baffling to me that he’s not more in demand for big profile books. The modern day equivalent to Dave Gibbons, Sharp’s work on all of the Green Lantern books since Morrison took over have been nothing short of spectacular, and his insanely out there and detailed creature designs truly make the book stand out from the other comics on the shelf.

I don’t think Green Lantern Season Two will really move the needle in any drastic way for the title, but I have to commend Morrison and Sharpe for crafting a comic that’s pretty easy to get into, despite being part of a larger run. The big ideas that Morrison is known for are a great fit for Green Lantern, and will hopefully lead to more people seeking it out.