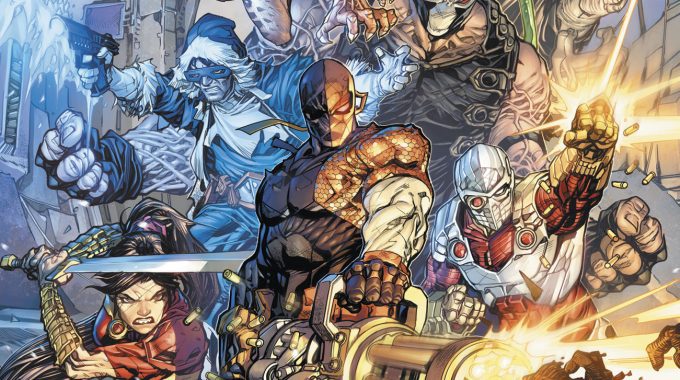 Dceased made a HUGE impact on the DC comics world, more so than you’d expect from a “DC superheroes meet zombie invasion” storyline would. The Tom Taylor scripted series was appropriately bleak, and ended with almost the complete annihilation of the world of the DC characters. So how exactly is Dceased: The Unkillables a new series? Well, it shows the untold stories of characters like Deathstroke, Red Hood, and few other of DC’s most notoriously hard to kill heroes and villains as they traverse the Anti-Life Equation ravaged world, and the results are even more brutal than the first Dceased.

When Slade Wilson’s recent mission puts him right into direct line of contact with the anti-life zombies, he’s quickly overrun and infected…..for about a day. Thanks to his super-healing, Slade is able to recover from the Anti-Life infection, and return to normal. Of course, that means he has fewer and fewer chances of surviving the world, and needs to find a way to survive long enough to make it out. That means teaming up with some of the worst villains DC has in order to make it through the apocalypse. At the same time, Jason Todd teams up with Jim Gordon and Cassandra Cain to make it through the destruction. Will their paths cross? Only time will tell….

Tom Taylor’s one of my favorite writers in DC’s stable, and Unkillables is a great example. From the brilliant idea of assembling these various characters to the surprisingly heartfelt moments for Gordon and Jason Todd, Unkillables quickly goes from feeling like a cash-grab tie in to something that absolutely feels like it would fit right in with the original miniseries. It’s a blast of a book, and feels like a natural extension of the original story that’s filled with jaw dropping moments.

Karl Mostert’s art is shockingly brutal, and adds the appropriate amount of horror and action that this series requires. There’s plenty of fantastic action sequences throughout this issue, and Mostert makes a HUGE impression on the book. I hadn’t see his art before Unkillables, but I’ll be sure to check it out from now on.
Unkillables is an absolute must buy for fans of the original Dceased series, and it fits right in with that original story. In fact, I’d go as far to say that it’s even MORE insane and over the top than the original story. If you thought the original story was insane, then you are not prepared for what Unkillables has in store for you.