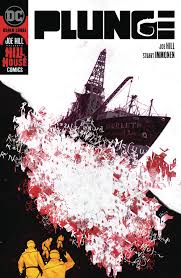 The Hill House imprint from DC keeps growing by the month, and we’ve finally got another title written by the imprint’s head Joe Hill with Plunge. A mix of The Abyss and classic John Carpenter tales like The Fog and The Thing, Plunge finds a marine biologist and a salvage crew investigating a distress signal from a survey ship. The only problem? That ship sank forty years ago, and shouldn’t be sending any kind of signal at all.

After a massive tsunami uncovers the Derleth, the ship starts sending out a distress signal to anyone who can read it. Once it reaches the mainland, Marine Biologist Moriah Lamb is called in to investigate. Thanks to her research on Arctic Reefs, she’s the go to person to investigate what happened with this ship. But when she and the salvage crew start their investigation, they’ll quickly find that they’re about to be in for something far beyond just an ordinary shipwreck.

Everything about Joe Hill’s script is RIGHT in my wheelhouse. Salvage crew at sea? Check. Mysterious ship sending out a distress signal? Check. Spooky nautical theme? BIG check. While this opening issue is essentially just an introduction to Dr. Lamb and the members of the salvage crew that are hired to help her, it’s not an issue at all due to Hill’s fantastic characterizations of everyone. Hill’s set up for this story is spectacularly moody, and fits right into the John Carpenter vibes he’s going for.

Stuart Immonen’s not the first artist I would pick for a horror book like Plunge, but I’m very impressed by his art here. Ocean waves, ships, and sea creatures are among some of the hardest things for artists to depict in comics, but Immonen handles it no problem. The mood established in Hill’s script is even more pronounced here in Immonen’s art, and it just furthers my belief that Immonen can literally draw anything and knock it out of the park.
Plunge is another great title for the Hill House imprint, and stands along some of the stronger titles in the series. If you are hesitant to add it to your list, you should really consider it, as it’s got a fantastic hook, and being written by the guy overseeing the line means that the quality will remain consistent throughout the run.