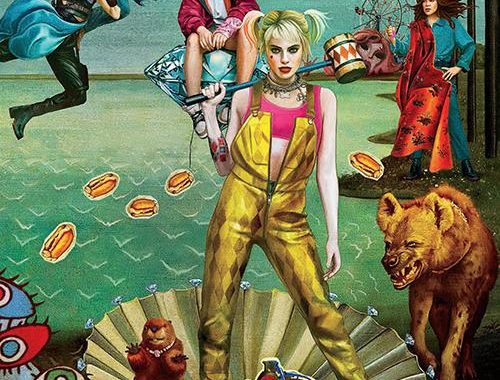 As the DCEU transitions from trying to copy Marvel Studios into a more “director-driven” studio, it’s opened up numerous directors to try new things with the DC stable of characters. Obviously we all know the results of Todd Phillips’ Joker, but what about a character that was already established fairly well in a previous mega successful (financially) film for the studio? Enter Birds of Prey, otherwise known by its much longer title, Birds of Prey: And the Fantabulous Emancipation of One Harley Quinn. A movie that’s both kind of a sequel to Suicide Squad and also another turning point for the studio post-Synderverse, the Margot Robie starring vehicle from director Cathy Yan is a surprisingly fun ride that has plenty of charm, but not without some faults.

After breaking up with The Joker (who’s only shown from behind in one shot), Harley Quinn (Margot Robie) strikes out on her own, attempting to start a new life. The problem with that? Well, now that she’s not dating the Clown Prince of Crime, all bets are off, and any protection she had is gone, leading to Harley being the prime target for all of Gotham City’s underworld. Crime boss Roman Sionis (Ewan McGregor), also known as Black Mask, makes it point to go after Harley, until she convinces the villain to hire her to bring in Cassandra Cain (Ella Jay Basco), a teenage pick pocket who comes into possession of a rare diamond that holds the key to a fortune belonging to the dead Bertonelli Crime Family. This all brings Black Canary (Jurnee Smollet-Bell), GCPD Detective Renee Montoya (Rose Perez), and The Huntress (Mary Elizabeth Winstead) into the fray, and soon they’ve all got to team up against Sionis and his men.

It’s a lot of plot for one barely two hour movie, and it gets a little hard to follow at points, but that’s actually on purpose. Harley’s narration throughout the movie means that we’re at her whims when it comes to watching Birds of Prey unfold, and that means that the plot has to unfold like her mind: a little scattershot, and a whole lot of absurd. And while that’s a fun trick that director Cathy Yan uses for the movie, it also makes the film suffer just a little bit, cause it definitely makes it a lot harder to figure out how the whole first act plays out.

That being said, this is really Margot Robie’s show, and after being one of the few bright spots of Suicide Squad, I was happy to see more of her. Like the live action depiction of Deadpool (another character that can get VERY annoying in big doses), Robie’s Harley works best when she’s allowing the other characters to underestimate her, and that’s definitely true here. Robie’s clearly having a lot of fun getting to play around as Harley more, and removing her from the grimy and dark world of the first Suicide Squad film really invigorates the character.

The other titular Birds of Prey have less screen time than Harley, and that’s to be expected. But Jurnee Smollet-Bell and Mary Elizabeth Winstead do make pretty bold impressions, especially Winstead, who’s dark and serious mood plays really well off of the less serious Black Canary and Harley Quinn. The film takes its time getting the leading ladies all together, but by the time they do, it’s worth the wait, concluding with a pretty spectacular action sequence in an abandoned funhouse as the Birds and Harley protect Cassandra Cain from the hundreds of mobsters that are looking to kidnap the girl for Sionis.

Speaking of Sionis, Black Mask has been a villain that I’ve always wanted to see on the big screen, and while he’s not in a Batman movie proper, I have to admit that I really enjoyed Ewan McGregor’s performance. While still menacing like his comic book roots, McGregor also injects a lot of unexpected humor into the character, but at no times is he a joke. He’s a real highlight in the film, and is clearly enjoying chewing the scenery, even if he’s only wearing his signature mask in a few scenes.

As much as I enjoyed a lot of Birds of Prey, there are a few things that stood out as a little strange for this longtime Batfan. I already mentioned the weird narrative choices in the middle film, but the characterization of Victor Zasz was a little off to me too. Played well by Chris Messina, the super dark Batman rogue is used more as a creepy right hand man for Sionis than the super murderous serial killer from the comics, and while we’d never get the villain straight from the comics, it’s a little strange to use a named Batman villain for a role that could have been anyone, not to mention the fact that Cassandra Cain, one of the most badass Batgirl’s ever, is now a kid in this movie who also could’ve been an original character for the film. I was also a little bummed that neither Huntress or Black Canary appear in a superhero costume, and that there are no real mentions of Batman or other members of his supporting cast, but I guess that’s expected when it comes to the ever changing world of the DCEU.

However, any of these issues are honestly pretty minor in the grand scheme of Birds of Prey. I hadn’t seen any of director Cathy Yan’s work before this, but I’m pretty damn impressed with what I saw here. Yan’s film works well as a part of the larger DCEU for those who are sticklers for that kind of thing, but it also works as a good intro film as well (there’s a spectacular animated introduction that gets you right into the tone of film perfectly). Not only that, but as I mentioned earlier, the fight scenes are very inventive and surprisingly brutal, with bats hitting kneecaps, beards being set on fire, and Harley kicking ass while roller skating. If this film ends up being a hit, then I really hope Yan comes back for the sequel.

After Aquaman and Shazam, I was hoping that the DCEU was on the upswing, and now that I’ve seen Birds of Prey, I’m pretty much convinced that it is. Marvel’s the big dog in the shared universe department, and while DC and Warner Bros tried, perhaps this is the best path for them: get promising directors who can give their characters the film treatments they deserve. Birds of Prey isn’t the film that will save the DCEU, but it’s definitely a sign of better things to come, and has plenty of kick ass character moments for titular characters.