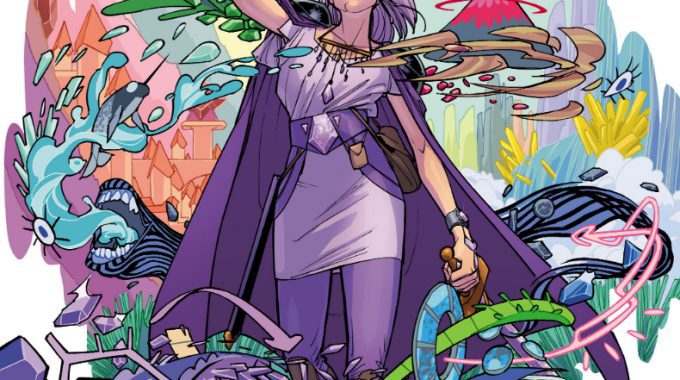 As someone who knows next to nothing about Amethyst, the real draw for me behind Amethyst #1 was Amy Reeder. The writer/artist is a huge deal in the comics world, and there’s been a lot of hype around this upcoming series from DC. And as someone with very minimal knowledge of the character, I was plenty surprised to find out how much I enjoyed this opening issue.

Amy is a child of two worlds. On our Earth, she’s a regular sixteen year old girl. On Gemworld, she’s Princess Amethyst, the protector of her world. Upon arriving in Gemworld on her birthday, Amy discovers that her kingdom is in shambles. This leads her to investigate her kingdom, which will lead to a stunning discovery: her parents are alive, and she doesn’t know it yet!

Amy Reeder’s script is a pretty fantastic look into the world of Amethyst, but at no time does it bog you down with too many details and lore. Instead, Reeder gives us a quick recap into Amethyst’s world and surroundings, and then starts the mystery. This kind of brick storytelling is very welcome, and I was very impressed with Reeder’s storytelling ability here. It’s truly a fantastic opening issue for this character.

Even better than Reeder’s script is her art, which features a ton of absolutely stellar panels that highlight the world of Gemworld. The sheer amount of creativity on display here is astounding, and Reeder clearly has had a blast creating and designing this world for DC. Her career was already pretty stellar in comics, and this should make here even more important in the industry.

Amethyst serves as a fantastic template for an opening issue. It explains the character and her world without info dumping you, contains a compelling premise, and has a lead character that you really like. If all goes well, this should be a solid seller for DC, and we’ll see a ton of new readers coming in to comic shops.