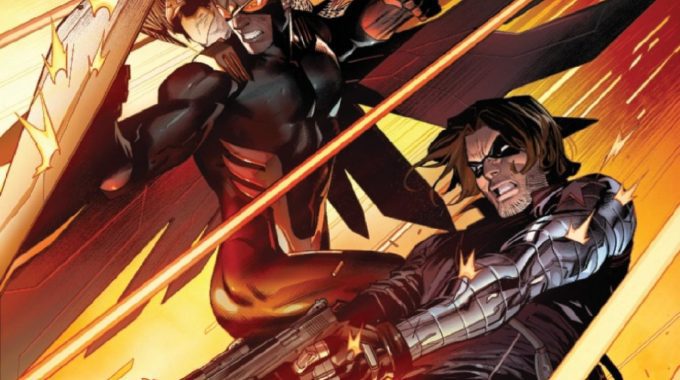 Seeing as how they have a shiny new Disney+ series on the way, Sam Wilson and Bucky Barnes are due for new comic series. While not in the MCU, the Derek Landry and Federico Vincentini new series delves straight into the espionage side of the Marvel Comic universe, and the results are an engaging and thrilling new entry for the two former Captain Americas.

When an office full of government agents is wiped out, it’s assumed that the Winter Soldier is behind it. However, Bucky’s not to blame, and when Sam Wilson arrives at the same scene, the two are quickly embroiled in a vast conspiracy that has ties to Hydra, who are a planning a big comeback after the death of their leader, Baron Zemo.

Right off the bat, Derek Landry’s script starts off at 10 and doesn’t let up. Both amazingly frenetic and able to set up the engaging mystery from the beginning, Landry absolutely nails the tone that you would want from a comic starring these two characters, and it straddles the line between being set in the larger Marvel universe and being a good starting point for fans of the MCU versions of the characters.

Just as thrilling as Landry’s script is Federico Vincentini’s art. A perfect mix of Ryan Stegman and Greg Capullo, Vincentini’s style hits the gas pedal on this series and makes an instant impression. I haven’t seen much of Vincentini’s art before this, but I’m absolutely positive that we’ll be seeing more from this artist in the near future.