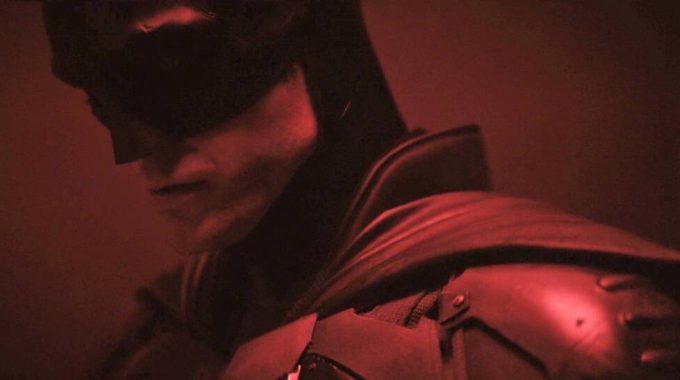 At long last, we’ve finally got our first look at Robert Pattinson’s Batman outfit, and it looks…pretty sweet! Eschewing the more grounded take that Batman V Superman had (and I was a fan of), Pattinson’s new Batsuit is like a cool mix between the Arkham Games and a little bit of Sean Murphy’s White Knight look, and it’s definitely something that fits right into what director Matt Reeves described as “something Bruce Wayne would make for himself”.

Right off the bat (pun intended), one of the interesting things about the VERY dark footage shown is the Bat symbol on his chest. Lacking the pointed ears of the typical symbol, this looks a lot more functional, almost like it’s a spot for a makeshift batarang in case he gets in a jam. While we’ll have to wait and see if that’s truly the case, it’s certainly an interesting take on the symbol, and it looks very cool regardless.

Another cool aspect of the suit is the slight collar on his neck. While not as pronounced as the collar Sean Murphy’s version of Batman wears, it’s definitely there, and like the weird bat symbol on his chest, looks to serve another defensive reason for the character. Namely that it’ll protect his neck in the case of someone trying to stab him from behind or take him out from a choke hold or something.

As neat as it is seeing Pattinson’s new Bat look, there’s a distinct missing of the ears on top of the cowl, which is one of my weird sticking points when it comes to depictions of Batman on screen. Too small and they look like little nubs (see Batman V Superman), too long and they stop being structurally sound and wobble when he runs(see Batman Forever). It’s an insane thing to want to see the MOST when it comes to a Batman costume, but here we are. My hope is that they strike a good middle ground between the BvS cowl and the Nolan films, but it would also be neat to see them acknowledge the early days of Batman by having the ears be slightly curved.

Even though we can only make out very few details in this new Batman suit, the fact that we FINALLY have some sense of Pattinson’s Dark Knight is pretty exciting, and will at least get me through this Summer when we’ll hopefully get a trailer reveal or something. My dream is that Matt Reeves will show us something with Paul Dano’s Riddler or Zoe Kravtiz’ Catwoman before then, but that may be outside of the realm of possibility. Either way, Batman’s new duds look pretty slick, and I can’t wait to see it in action.