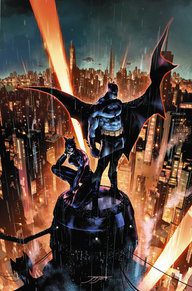 Batman has quickly become the hottest book on the market right now, and it’s all thanks to the Joker’s new henchwoman, Punchline. But I’m going to let you in on a spoiler for Batman #90 right now….Punchline’s not in it. At all. Instead the latest installment of James Tynion’s bat-tale, featuring art by Jorge Jimenez, rewinds the clock to reveal how Catwoman, Joker, Riddler, and The Penguin met The Designer, and what that means for The Dark Knight now.

As the Designer’s plans continue to work against the Batman, Catwoman explains to Batman what occurred in the early years of the Dark Knight’s career. One night, she, Joker, Riddler, and Penguin were summoned by The Designer, a mythical criminal known only by legend. Meeting at his Tartarus house, the Designer discusses plans with each villain, helping them concoct the perfect plan to destroy the Batman. But when the Designer meets with The Joker, things go awry, and the villain quickly turns the tables on the man who is trying to help them. But of all the villains’ plans, it’s Catwoman’s that would cause the most damage to Batman, and that’s the one that’s being enacted right now!

I’ve mentioned before that Tynion’s run has been a more “back to basics” approach for the title, and that’s still true, but now that we’ve learned the true motivations behind The Designer and the individual plans that the villains created with him, the story has started to really click into place. Tynion’s gift for characterization works spectacularly well for the main Batman villains, and having this issue almost entirely be in Catwoman’s voice sets of the tone beautifully. The actual ramifications of Catwoman’s plan are pretty great, and it’ll be interesting to see how it all plays out in future issues, especially with her trying to help Batman stop this plan from going through.

Phil Jimenez joins the stellar ranks of awesome artists working on this series with Tynion, and he’s naturally a great fit for this issue. Jimenez is well known for his fantastic style on books like Justice League, and it’s fantastic seeing him play in the world of Gotham City. While I’m not entirely sure if Jimenez is staying on the book for another few issues or just filling in, but I’m really hoping we get to see more of his work on this title.
While you won’t see any of the hottest character in comics this issue, those picking up Batman #90 for the actual story will find it plenty engaging, and easily the best issue of Tynion’s run so far. Full of solid reveals for the ongoing mystery of The Designer, Batman #90 is definitely another step in the right direction for the series, and is shaping up to be a pretty neat Batman tale.