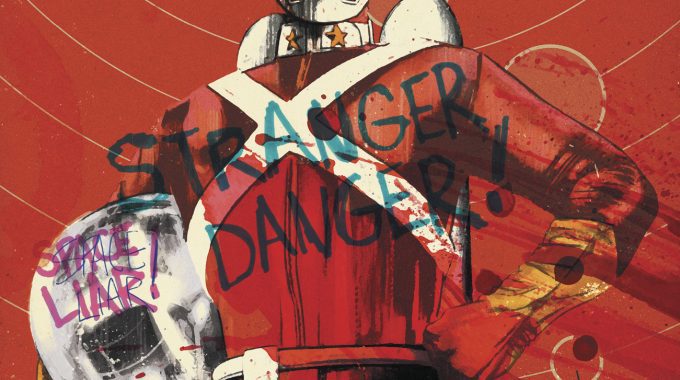 The dynamic duo of Tom King and Mitch Gerads are back with Strange Adventures, a new miniseries event that looks at the life of another smaller DC hero: Adam Strange. With secondary artist Evan “Doc” Shaner along for the ride, King and Gerads’ new series feels exactly like the spiritual sequel to their stunning Mister Miracle series, and like that series, is a must read for comic fans.

Touring the country promoting his new book, Adam Strange is soon framed for a crime he didn’t commit. A boisterous fan has wound up murdered by a space weapon, and all signs point to Adam. But the hero of Rann isn’t behind it, and he believes it’s his enemies from that far off planet coming to Earth. But how can Strange get anyone to help him?

That’s the mystery that Tom King sets up in this issue, and so far it seems like a pretty great one. Like Mister Miracle before it, Strange Adventures works as a fantastic introduction to the character, one that I admittedly know next to nothing about. King’s use of real-world things like press conferences, morning show interviews, and even promotional book signings are all heightened by being juxtaposed with Adam’s battles on Rann, and make for a pretty fascinating read.

Adding to Tom King’s script is Mitch Gerads’ art, which of course is fantastic. But the bigger surprise for me was the use of Evan “Doc” Shaner’s art for the Rann sequences. Shaner’s old-school style is a perfect fit for these sequences of the book, and the balance between Gerads’ and Shaner’s art styles does a lot of great work to compliment the already stellar script. Either one of them would have knocked the entire book out of the park, but getting the two of  them in the same book makes for a fantastic deal for fans of good comics.

If you loved Mister Miracle, then picking up Strange Adventures is a no-brainer. It hits all of the same beats as that previous series, but still adds new layers to the story by adding in the Adam Strange backstory. There’s a lot of buzz around this book thanks to the acclaim of Mister Miracle, and this is certainly going to be a worthy follow up.