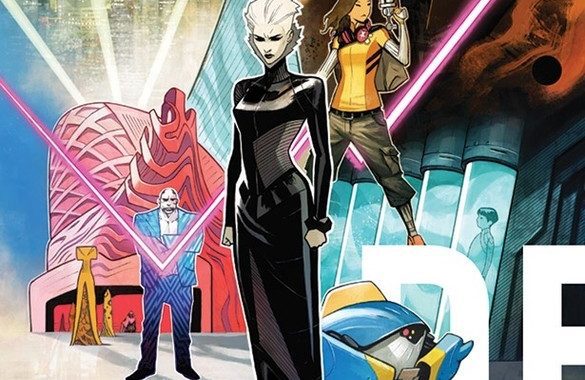 After rebooting the X-Men with the one two punch of House of X and Powers of X, it’s time for Jonathan Hickman to go back to doing what he does best: weird space operas. Unlike other Hickman space stories, Decorum is surprisingly easy to get into and understand, and it’s chock full of crazy art from his House of X/Powers of X variant cover artist Mike Huddleston.

Set in a far off galaxy, Decorum’s first issue follows Neha, an intergalactic courier who’s on a mission for a client. Everything is going to plan, until she runs afoul of a galactic crime boss who’s assassinated by Imogen Smith-Morley, a member of the Spiral Arm assassin guild, and one of the biggest names in the business. As witness to the murder, Neha’s suddenly very much a wanted target. So what’s Imogen going to do with her?

That’s a mystery that Hickman leaves for the next issue, but there’s plenty here to get reader’s minds turning. While he’s no stranger to crazy, out there ideas, Decorum is remarkably easy to get into, which is no small feat when you consider the sheer amount of ideas are contained within this book. Honestly it’s kind of surprising that Hickman is able to keep churning out these kinds of wild ideas. I sincerely would have thought that he’d run out of ideas by now, but he keeps cranking out crazier and crazier plots and characters.

While my synopsis might make the issue seem brief, it’s actually pretty long. But a lot of that length is given to Mike Huddleston’s art, which is pretty spectacular. While I was aware of his art thanks to the House of X and Powers of X variant covers, I had no idea what his interior pages would look like, but I’m pleasantly surprised by the how great his art is in this. There’s a ton of creativity brimming through his artwork, and it’ll be really interesting to see where he goes with future issues.

Fans of Hickman’s out there plots and science fiction will find a lot to like in Decorum, and new fans of his from House of X and Powers of X will actually find this to be a really interesting and accessible new indie series. How Hickman will be able to balance this with his other work with Marvel’s mutants will be interesting, but right now, it’s cool to see him back doing weird space stuff.