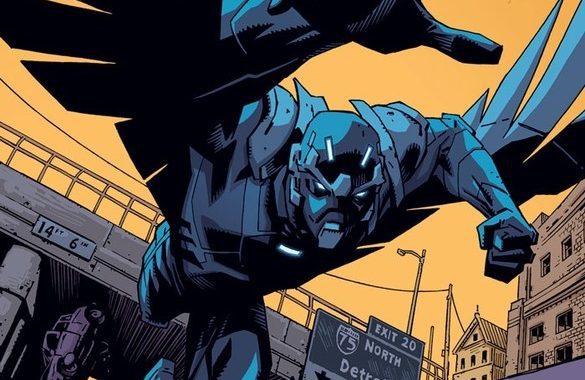 Image hasn’t produced a lot of great superhero comics for a while now. Ever since the end of Invincible, the publisher has shied away from superhero fare, focusing more on titles that don’t fit in with the tights and capes crowd. But Stealth, the new series from Mike Costa and Nate Bellegrade (based on an idea from Robert Kirkman and Mark Silvestri) looks to change that, with a pretty neat hook that will leave readers surprised by the end of the first issue.

Tony Barber is a reporter for the Detroit Herald, and he’s seen the worst of his city. Tired of being stuck with the usual puff pieces, he tries his best to shine a light on how the city is being mistreated by those in charge. At the same time, the hero known as Stealth is patrolling Detroit, taking the law into his own hands. But something isn’t right with Stealth, and Barber knows the truth. But that truth, if revealed, could cause major damage to the city if it gets out!

I won’t reveal the big surprise at the end of this issue, but suffice it to say, it’s a doozy. Stealth’s script from Mike Costa is a master class in a reveal, and it’s expertly designed to make you think it’s going to go a certain way up until the final few pages. In fact, Costa’s script works so well that I initially thought Stealth was just your average generic superhero rip off comic, until the final few pages completely threw the rug out from under me.

Nate Bellegarde’s art has a lot of shades of Invincible‘s Ryan Ottley, and it works really well for the tone this book sets. Bellgarde’s slightly cartoony style looks great for the action sequences, but he’s also surprisingly adept at using his art to depict the harsher aspects of life in Detroit. I fully expect Stealth to help raise Bellegarde’s profile in the industry.

Stealth was as book that I initially thought was just another superhero clone book, but by the end of the issue I was extremely surprised by it. This is a series that looks to be full of surprises, and if the next issues are anything like this one, the ride is just getting started.