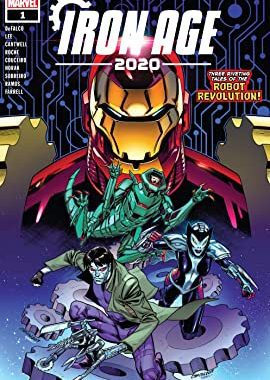 You may not be aware of it, but Marvel has another event happening right now surrounding Iron Man 2020. The Iron Age2020 certainly doesn’t have any of the buzz of something like, say, the upcoming Empyre or even something smaller like Donny Cates’ Thor run, but…well I’ll be honest, it’s tough to get excited about an event focusing on Arno Stark and Machine Man, two characters that I struggle to think of having any real fanbase to base an entire event on. Yet Iron Age 2020 has a special event one shot focusing on Machine Man, the robot army, and the robotic cat that/s been featured in Iron Man, and it’s on stands right now.

There’s a definite sense of “we didn’t have any space for these stories, so let’s put them in this special” feeling to Iron Age 2020. Neither story has anything really substantial to say, and it doesn’t feel like Iron Age 2020 is a really important aspect of the story. That being said, Frank Tieri and Christos Gage do their best to try and make this special seem important, even though I can’t imagine anyone but the most die hard Marvel zombie wanting to pick this up.

The art from Andy MacDonald and Mike Hawthorne is pretty solid, and fits in line with what we’ve seen from previous Marvel series. But there’s nothing special here to make me not think that this was all just a bunch of holdover stories from other series in the Iron Age 2020 series. I don’t want to make you think that it’s a knock on either artist, they’re both great, but there’s nothing here to make me thing that this needed to be a standalone special either.

Iron Age 2020 is a special that probably doesn’t need to be on the racks. In fact, it simply feels like the kind of book that was put out to fill the publishing requirements for Marvel, and that’s it. It’s pretty inconsequential in the grand scheme of things, and I don’t feel like I found out any great new revelations about the Iron Age event that’s going on. As it stands right now, you’re probably better off just skipping this one unless you’re heavily invested in the event.