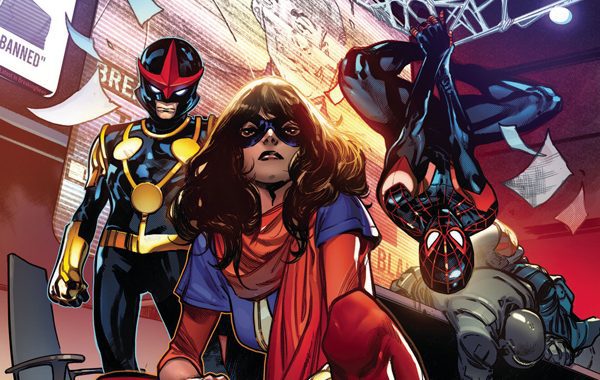 Marvel’s Champions series has quietly been one of the publisher’s most long-running team books (outlasting even the original 1975 series), and serving as a good place to put some of the newest heroes in the Marvel universe who maybe can’t support their own titles just yet. Nova, Ironheart, Miles Morales, and Ms. Marvel have all made a name for themselves as the new Champions, but it’s all going to come crashing down in Outlawed. This kickoff to the mini-event from writer Eve Ewing and artist Kim Jacinto reveals the event that causes the US government pumping the breaks on underage super-heroics, and in the end finds these young heroes in desperate straits.

Following a devastating attack on a college campus, the Champions find themselves on trial for their actions. Despite saving lives and preventing even more damage, the team is struggling to find the support they need, even though Captains Marvel and America are vouching for them. Yet despite all of this, the government decides that they need to step in and oversee any heroes under the age of 18, therefore making Nova, Ms. Marvel, Miles, and the other Champions outlawed heroes, and can’t help the people they’ve sworn to protect.

There are a lot of similarities to Civil War in this book, and I’m fairly certain that’s intentional on Eve Ewing’s part. Ewing’s script is absolutely believable, and definitely feels like something that would happen within the Marvel universe (hell, it’s probably the most “real-world” thing happening in the Marvel universe at the moment). Ewing’s script does a great job of setting the stakes, but she doesn’t put the focus on every member of the team. Surprisingly, major members of the team like Viv Vision and even Ms Marvel and Miles aren’t featured as much as you’d expect, and the end of the issue takes one of them seemingly off the board for the whole event. It’s still a pretty solid beginning though.

Kim Jacinto’s art does everything it needs to in this kind of book, bouncing from the action packed events that lead to the Champion’s trial to the stern and tense deliberations in the Senate chambers. It’s a testament to Jacinto’s skills as an artist that they’re able to balance these two aspects of the book, and lends itself to quite the thrilling read.
While I dropped off on The Champions a few issues ago, it was nice to see the team get their own event, and for that event to be pretty new reader friendly. The roster hasn’t changed that much since I stopped reading the title, and it is pretty great that all of these new Marvel heroes have a book they can call their own. While Outlawed won’t make the kind of splash that Civil War did back in the day, it should still serve as a good little event for the characters and their fans.