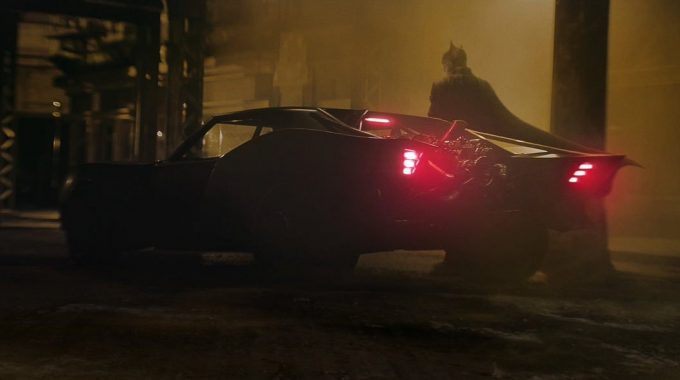 “The Bat and the Furious”

Now that we’ve got our first look at Robert Pattinson’s Batsuit (both officially and unofficially) it’s time to start revealing other famous aspects of the Dark Knight. Namely, his car.

The Batmobile is arguably the most famous thing about Batman, and like its owner, has gone through numerous iterations both in comics and on the big screen. The Burton and Schumacher films favored fanciful sports cars. Adam West’s famous wheels had more in common with a hot rod cruiser than a machine designed for war, while the Batmobiles in Nolan’s trilogy and Batman V Superman put the “dark” in “Dark Knight”.  Naturally director Matt Reeves and his crew had a lot of different angles to explore with the wheels for Pattinson, and what we got was something that wouldn’t look too out of place in the next Fast and the Furious movie.

The look of this new Batmobile is definitely what I’d qualify as “DIY”, and that fits in exactly with how Matt Reeves has described this film. While not an origin story for the character, The Batman takes place very early in Bruce Wayne’s war on crime, which naturally means that a lot of things that he’ll use will be in their early stages. The Batmobile looking like the combination of a Dodge Charger and Lamborghini definitely fits in with that idea, and wouldn’t be outside of the realm of possibility for a super rich guy like Bruce Wayne to initially think of in his early days of crime fighting. This Batman is still pretty green, so the idea of having extra armor plating or smoke grenades popping out of his vehicle probably isn’t high on his list of amenities for his ride.

It’s also worth noting that the idea of the Batmobile being more tank like is a relatively new one in the grand scheme of the character. Aside from the vehicle featured in The Dark Knight Returns, every Batmobile in film and comics has leaned more on the sporty side. It wasn’t until Christopher Nolan’s Batman Begins that the Batmobile started to become more tactical, and while that’s a fun take on the vehicle, the fact that this Batmobile is going back to the sport car roots of the comics isn’t a gigantic shock, despite what the internet wants you to believe.
Of course, it’s also possible that this is just ONE of the rides Batman will have in this new adventure. Rumors abound that The Batman will end with the Caped Crusader looking and rocking tech that we’re more used to, so maybe this is literally a prototype Batmobile, and one closer to what we’re used to will pop up in time for the credits. Either way, I think this Batmobile looks pretty neat, like everything else I’ve seen from Reeves’ film, I’m excited to see it in action.