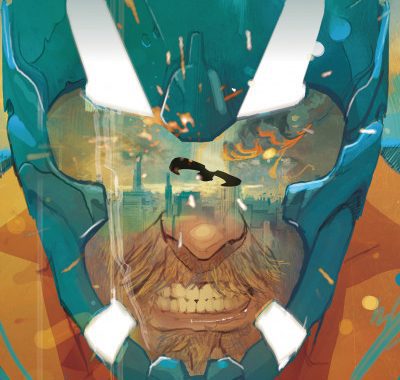 It seems like we just had an X-O Manowar #1 from Valiant, and judging by the publisher’s output, we did. And while the constant renumbering for the series has gotten a little (okay, a LOT) old hat by now, Dennis Hallum and Emilio Laiso’s new #1 actually serves as a good jumping on point for readers who either never read an X-O story before, or fell off the character the last time he was renumbered and relaunched.

Aric, the 5th century warrior who has found himself in an alien armor in modern day, is attempting the whole “superhero” thing, and so far, he’s doing…just okay at it. While he’s able to stop missiles and bank robbers, he struggles with pulling all of that off with ease and minimal collateral damage. As he traverses the modern day, learning about basketball, modern cars, and other things we take for granted, Aric slowly warms up to life in modern times, until a new enemy with knowledge of Aric’s armor comes into play.

Dennis Hallum’s script covers a lot of ground in a short amount of time, and usually that would be cause for alarm. But surprisingly, for a book that bounces from Harlem to Canada and back again, X-O Manowar #1 is a pretty straightforward read. Seeing Aric’s numerous attempts to understand modern times is very entertaining, and his frustrations with the things we take for granted are pretty hilarious at times. While there’s not a lot of plot in this first issue, Hallum’s use of humor and characterization of Aric more than makes up for that.

If Valiant has a “house style”, than Emilio Laiso is definitely it. A mix of Stuart Immonen with a little bit of Rafael Albuquerque, Laiso’s style is perfectly suited for this series, and is pretty diverse as well. Like Hallum’s script, Laiso has to depict a lot of things in a small amount of time, yet at no point does this art seem rushed or out of place. It’s a real treat to see Laiso’s art here, and I’m really curious to see what he’s going to draw next issue.

While it’s another #1 issues that will probably get lost in the Valiant shuffle, X-O Manowar #1 is a title that honestly deserves to be checked out if you have the wiggle room in your comic budget. Unlike previous runs on the character, this one looks to forego the big bombastic action and instead tell the more human side of Aric and his alien armor as he struggles to find his place in a world he doesn’t know.