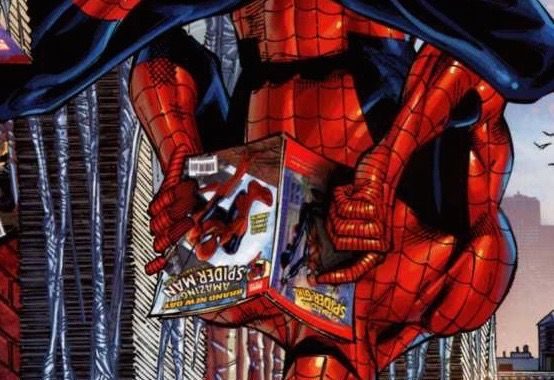 You’re probably thinking that “no new comics from Diamond = no comic reviews”. Well, you’re kind of right. But one of the great things about comics is that you don’t have to have brand new stories to read! In fact, there’s tons of awesome titles waiting or you in this social distancing life, and I’m here to give you a run down on the titles you can read while you sequester yourself in doors. Some of these are well-known, others not so much, but they’re all fantastic series that have plenty of material for you to dive into.

The most recent collection on the list, Boom! Studios’ hit series made a huge impression on the comic market, and rightfully so. Keiron Gillen and Dan Mora’s series takes the Arthurian legend and spins it into a more menacing story, as the titular once and future king was actually not the hero he was painted as, but a ruthless monarch who wants to see England as the dominant country on earth. Imaging Indiana Jones by way of Tim Burton, and you’d probably have a pretty good idea of this series, which currently stands as one of my favorite indie titles out there.

I recently got back into Cullen Bunn’s horror-themed Western, and it’s a real treat. Following the exploits of Drake Sinclair and Becky Montcrief and their quest to prevent the titular gun from following into the wrong hands, the Cullen Bunn and Brian Hurtt series is brimming with ideas on every panel. Even better, the series is all complete and finished, so you can pile up the trades and make your way through the series while you stay indoors.

Turning the Hulk into a horror book is one of the more “out there” ideas in recent Marvel memory, but it’s paid off wonderfully. Under Al Ewing and Joe Benett, The Immortal Hulk is a serious contender for “scariest comic of the year”, something that’s completely surprising when you consider it’s being published by Marvel. There’s some seriously messed up stuff that’s happened in this book so far, and it all comes to menacing, super gory conclusions each story arc.

This past Summer, Jonathan Hickman jump-started the X-Men, giving the series a creative resurgence that hasn’t been seen since Joss Whedon’s Astonishing X-Men. Following Professor Xavier’s creation of the sovereign mutant nation of Krakoa, Hickman’s line-spanning relaunch (which starts in the alternating miniseries House of X and Powers of X) has not only returned the X-Men back to their place of glory with Marvel, it’s also made the X-Men the most accessible they’ve been in ages.

At nearly 100 issues, Tom King’s DC Rebirth run on Batman was filled with big moments and small ones, and all of them made the run one of the more memorable and unique ones for the character. Was it frustrating at times? Sure was. But some of that frustration is probably due to the fact that I was reading the series on an issue by issue basis. Now that his run is all over and done with though, it will read much smoother where you won’t have to get it in twenty page bites. And it’s still filled with a lot of great character moments for Batman, and shows off a side of him that we never really see.

There’s really no wrong Darth Vader series to read from Marvel, but the best one to start with is easily Kieron Gillen and Salvador Larocca’s run. Taking place between A New Hope and The Empire Strikes Back,this run finds Vader demoted and searching for information on the Rebel who destroyed the Empire’s mega weapon, the Death Star. A great mix of political intrigue and Star Wars underworld adventure, it’s a great look into one of cinema’s greatest villains that amazing doesn’t do anything to ruin the character.

Comics live and die on their premises, and Chris Dingess and Matthew Roberts’ Manifest Destiny has an absolutely killer one: famed explorers Lewis and Clark’s adventures into the western frontier isn’t just to research this area, but to catalog and destroy the monsters that exist there so the country can expand West. It’s a fantastic idea that has filled up close to fifty issues (and counting) of fantastic comics, and it doesn’t show any signs of slowing down now. Fans of historical fiction and monsters will absolutely devour this series, which features some of the most unique monster designs I’ve ever seen.

Mike Mignola’s Hellboy is always a welcome read, but the not as well-known Baltimore series (written with author Christopher Golden) is just as inventive and horrifying as the big red guy. Following Lord Henry Baltimore’s quest for the vampire who murdered his family in a post-World War I England, the Baltimore series is made up of different miniseries that can be read either by themselves or as one big storyline, and they are definitely one of the best comics that not enough people know about.

And there you go! Hopefully these titles give you some much needed distraction from the world around us, and remember, there’s always Sandman, Y: The Last Man, Preacher, Saga, and literally thousands of other titles out there for you to check out if you still haven’t. For now though, stay safe, stay sane, and wash your hands!